New From InnerTalk PLUS A Confession 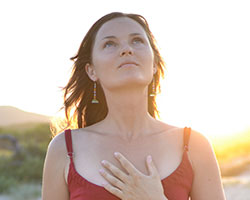 They say that confession is good for the soul. One of the signs that Eldon and I have a very solid relationship is the fact that many of our private conversations can begin with questions such as, “Can I tell you something?” “Do you want to hear a confession?” Or, “I just figured something out about myself. Did you know . . . ?” Today, I want to share something with you–a not-so-nice characteristic of mine that I only recently discovered.

But before I get to that I have three quick announcements for you.

1) Last week I received an e-mail asking why Eldon had stopped writing newsletters. Well, the fact is, he hasn’t. This is still his newsletter but I have just been helping him out. These days, Eldon is blogging very regularly and you can sign up for his blog here. He covers some really fascinating subjects in his blog so I urge you to go sign up right now. Eldon also spends a lot of time preparing for his Provocative Enlightenment radio show that can now be heard on KMET1490 AM (Riverside/San Bernardino), our newest syndicated network. He has interviewed many incredible guests, ranging from actors (Linda Evans and Lyndsay Wagner) to mediums (James Van Praagh), from noted atheist (Michael Shermer) to professors (Amy-Jill Levine and Jay Garfield), and many more. His shows are always very provocative and enlightening. There are many ways you can listen to Provocative Enlightenment worldwide and you can find out more at the website, ProvocativeEnlightenment.com.

2) Eldon’s latest book, Gotcha!, is due back from the printers next week. Orders placed before then will receive a huge discount plus an autographed bookplate. Early reviews are raving about this book and I believe that personal growth simply is not possible until you learn how to navigate all the Gotchas! in today’s world. Click here for more details and order your copy now.

3) Eldon has just released a number of brand new, but much requested, InnerTalk titles. Single InnerTalk CDs are always $27.95, but as an introductory special, you can pick up these titles for just $19.95 and you can still take advantage of our buy 4 get 1 free special. The new titles are:
* Relief from Seasonal Affective Disorder
* Freedom from Responsibility Syndrome
* End Caffeine Addiction
* Freedom from Pornography Addiction
* Releasing Envy
* De-cluttering Your Life
* Becoming Vegetarian
* Adult ADHD
* Eliminating the Get-Even Response
Check them out and see which ones will improve your life!

And now, back to my confession. One of the titles in the above list was created especially for me. Which one do you think it is?

One of the perks to being Eldon Taylor’s wife is the fact that, when I uncover a problem of mine, I can simply request a custom InnerTalk program. Sometimes these programs become part of the InnerTalk line (such as Healing Emotional Pain), while others remain for personal use only. Not long ago, I observed an automatic reaction of mine that I decided I did not like. The fact is, I have had this automatic response pretty much all of my life (I think), but I really have no idea why I suddenly became aware of it. One of the questions that Eldon asks in his seminars and presentations is this: “Why do most people not take the time to think about the kind of person they would like to be and then create a plan for how to achieve this?” Now, this has never been my issue because I generally attempt to correct character flaws as soon as I see them. There are of course two problems with this. First, character flaws normally attempt to hide from us, generally in a range of justifications and rationalizations, and second, these flaws are such deep seated habits of ours that they can simply be very hard to change. But as I said, I have the advantage because whenever I uncover issues of this nature, I just ask Eldon to create a custom InnerTalk program for me. And of course he always obliges, especially as he has often been seeing these issues for a very long time!

Not long ago, Eldon was expressing his frustration with my dogs (two miniature Australian Shepherds). I don’t remember what it was my girls had done wrong this time, but Eldon was very vocal about his displeasure. So vocal in fact that it triggered a response in me that went along the lines of, “So what if my dogs do that, at least they don’t eat the house like your dog has!” Eldon’s favorite dogs are German Shepherds and our current German Shepherd, Sable, has literally been eating the trim on the side of our house–great big chunks of it! (In fairness, Sable is our son’s dog).

Now, the important thing here is not that I was (or may have been) justified in making this comparison, but rather that it was a knee-jerk desire to hit back . . . to respond in kind . . . to seek revenge! He hurt me by maligning my lovely little dogs so I had to point out that Sable was a real monster! And suddenly I realized that this ‘knee-jerk response’ was kind of an ugly characteristic of mine. I was not complaining about Sable as I really see these issues as part and parcel of having pets (which bring a whole new value to life itself in my view), but rather it was a tit-for-tat response which was really very small minded of me.

Once I had seen this particular character flaw of mine, I wasted no time in sharing this information with Eldon. I then asked him to create a custom program to assist me in overcoming this issue. Now, we did have a hard time coming up with a title for this program–the issue is the desire/need for revenge, but ‘revenge’ is such a hard word. In time, we settled upon Eliminating the ‘Get-Even’ Response and my copy is already in my player.

There are a few other titles in our list of new programs that I will also use (De-cluttering Your Life, and Freedom from Responsibility Syndrome), but I will be starting with the most important one, Eliminating the ‘Get-Even’ Response as that is simply not the kind of person I choose to be.

Create the Person YOU Choose to Be

Have you ever stopped to think about the kind of person you would choose to be? In addition to the new titles we have just introduced, there are a number in the Better Life category of our InnerTalk library that can be very helpful, such as Freedom from Gossip, Freedom from Profanity, Accepting Constructive Criticism, Developing Compassion, Mellow, Patience, Non-Violence, Freedom from Television. You can check them out here.

And don’t forget the special $19.95 price on the new titles that you can use in addition to our Buy 4 Get 1 Free special.

Becoming the kind of person you actually like can begin today! Enjoy!

P.S. If you enjoy these newsletters, please remember to share them with your friends and family. There are easy share buttons at the top of this newsletter. You can also friend Eldon and Me on Facebook as we both love interacting with you all. You can also read (and subscribe to) Eldon’s regular blog here.

This is a limited time special offer that expires at midnight on Sunday, August 2nd, 2015

Remember, InnerTalk has been researched at numerous independent universities and institutions (such as Stanford University), and been demonstrated effective at priming how you speak to yourself. When your self-talk changes, so does the reality you experience!

“Eldon Taylor is so spot-on.
Gotcha! tells it like it is,
and it isn’t what we want to happen!”
~ George Noory, Host of Coast to Coast AM