The Creative Doorway to Spiritual Insights 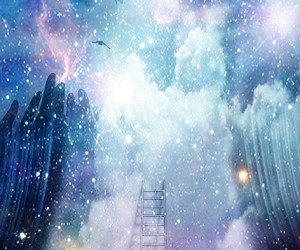 Being creative is a lot more than just artistic expression or problem solving. For me, opening up my creative abilities is also leading to greater spiritual connectedness. Let me share some experiences with you.

When I first met Eldon, just over 25 years ago, I had not even heard of the New Age, and although I was dabbling in self-help, I did not know this was an arena of its own. I have always believed in ‘something higher’ though and really wanted to find out how to access it. One of the techniques I was introduced to very early on was that of automatic writing. This was not the kind of automatic writing I learned while at the National College of Hypnosis and Psychotherapy—letting your subconscious mind control the writing while you were under hypnosis in order to access hidden memories—but rather it was a fully conscious form of writing to your higher self or a higher power. In this technique, you write down your question, empty your mind and then write down whatever comes to you. Maybe I was just not any good at ’emptying my mind’ as the stuff I wrote was garbage, full of New Age glittering generalities that may make you feel good but do not hold up to any serious inspection—simply a regurgitation of current popular ideas! Feeling very silly I quickly gave up on this technique.

The next technique I tried had to do with taking a question into my dreams and hoping for answers that way. To do this, I would simply focus on the question as I went to sleep. I was not too successful here either—at best I received nothing and simply dozed off, but more often then not the process would just get my mind ‘too busy’ so that I could not even fall asleep!

After that, I tried hypnosis again—after all this was one of Eldon’s specialties. Eldon used a technique on me that involved expanding consciousness upwards and outwards (something he called Hyperemperia and which he later recorded and included in his Creative Thinking album). This time I had a very interesting experience that appeared like a kind of daydream, but the information I was told in this state did actually come true six months later—exactly as I had seen it in spite of the fact that it involved an entire series of events! That had to be one of my most startling pre-cognitive experiences!

So why did I get valuable insights using hypnosis and just got garbage when I tried automatic writing? I believe there are several reasons for this. While I am not a believer at all in the infallibility of channeled material (and it should be infallible based on how it is represented), I do think all of us access higher information—I just prefer to call it inspiration, intuition, etc. In fact, I tend to believe that some of the most successful writers are simply accessing higher-level information. To achieve success at opening up our creative abilities, we must:

Eldon’s Creative Thinking album is specifically designed to remove the negative beliefs about your own creative abilities. The InnerTalk subliminal programs remove the inner chatter that can become very loud when you feel that you are not capable or good at being creative, and the headphone programs train you in quieting the mind while allowing the creativity to flow through. It was through the use of these headphone programs that I have really learned to quiet the mind and now this is a technique I use most nights just before going to sleep. Unlike the technique I was introduced to years ago, this does not involve taking questions into my sleep and hoping for answers, but rather, it involves entering that quiet place just before sleep comes, asking my questions and receiving the answers!

Physically writing stuff down does not have to be a part of the creative process but for myself, I find it very useful to get things down on paper. Once you get over the hurdle of allowing creative writing, you would be amazed at some of the information that can come forward.

The Doorway to Higher Communications

So where has all of this work gotten me? As I have said, I do not like convenient answers—those answers that make you feel good but which do not hold up to any sensible inspection—but I do still work on making sense of the world around me and trying to come up with possible answers to those important questions, ranging from the meaning to life to spiritual solutions for the practical aspects of day-to-day living. I am currently exploring my own ideas on spirituality through the process of writing a 4-part series of fiction books, and I am also playing with 3 other non-fiction books! Creativity has now become a lot of fun for me—which brings a whole new quality to life by itself—but more importantly it is becoming a doorway for me to higher communications. I cannot tell you how many of these newsletters I send out that are actually written in my head right before I go to sleep—in that quiet empty space where thoughts relax but sleep is not yet taking a hold. There have been several times that I have surprised myself by the ideas that have come to me! I also use that quiet place before sleep to find constructive solutions or insights into other issues I may be dealing with.

The fact is, opening up your own innate creative abilities matters! Opening up that doorway to your higher self will allow you to discover solutions to problems, bring an extra dimension of happiness to your life and bring you some semblance of understanding regarding the purpose of your life. I think this is a really important issue and that is why we decided to extend the discount on Eldon’s Creative Thinking album. This collection is valued at $259.60 but for one extra week, you can get this for just $98. This is a limited time special offer so Act Now! Stop neglecting your creative side and open up a whole new world of happiness! Click here and Get Your Copy Today!

This is a limited time special offer that has been extended to midnight on Sunday, June 14th 2015